Tinsel town's favourite Sonam Kapoor, who is a style inspiration for many, recently graced the bridal avatar for a magazine cover. 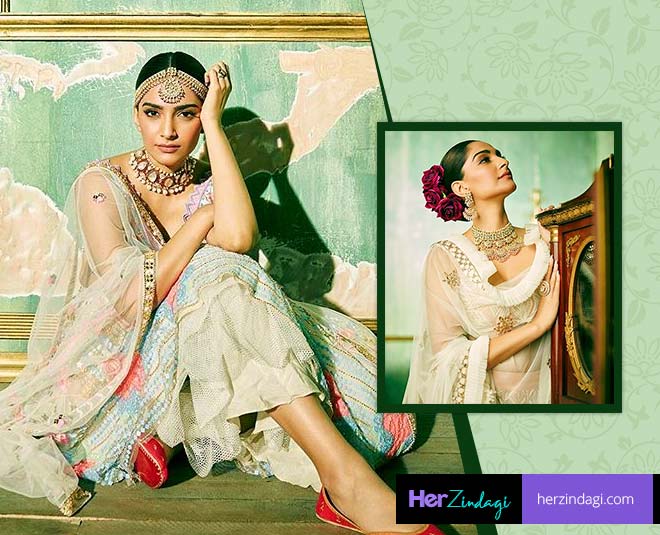 Glamour, style, and sass- Sonam Kapoor Ahuja surely has all of it. Back in 2007, the diva stepped foot in the industry and since then, she has been constantly ruling our hearts with her skills and mesmerizing looks. The actress, who has a lot of projects in her kitty currently, recently featured on the cover of a fashion magazine and her latest photos made our eyes pop out!

Couldn't wait to share the gorgeous cover of @thebridalasiamagazine, showcasing stunning wedding couture & jewellery inspiration! I loved being a part of this shoot with @bridalasia. Get your hands on the exclusive collector’s copy in Mumbai on the 17th-19th August 2019 at NSCI, DOME, Worli, Mumbai. Outfit : @anamikakhanna.in Jewellery : @hazoorilaljewellers by Sandeep Narang Shot by : @arjun.mark Styling and conceptualisation : @mohitrai Set and art direction :@gopalikavirmani Hair and make up : @namratasoni Produced by : @mmcworld_official Co-Ordinated by : @bling_entertainment @quirk_india #bridalasia #bridalasia2019 #bridalasiamagazine #indianfashion #weddinginspiration

The actress shared her pictures in bridal avatar on social media. On the cover of the magazine, the 34-year-old actress was seen donning a mint-green lehenga with a powder-pink dupatta. With kohl-rimmed eyes and nude makeup, Sonam accessorised her look with matha-patti and choker from the Hazoorilal Jewellers collection. Keeping her hair simple, she opted for a sleek bun.

In one of the shots, Sonam decked up in an off-white saree by designer Rahul Mishra. Keeping the look graceful, she teamed this look with a layered necklace and oodles of highlighter.

For another shot, she wore a white and gold Ritika Mirchandani lehenga, giving major vintage vibes. Adding more glamour to her look, hair and makeup artist Namrata Soni tied her hair in a sleek bun and adorned it with red roses.

Make way for the ever so elegant, Sonam Kapoor (@sonamkapoor), adorning the cover of @thebridalasiamagazine. Her subtle opulence & regal charm, made for an iconic shoot. . Get your exclusive copy in Mumbai on the 17th-19th August 2019 at NSCI, DOME, Worli, Mumbai. Delhi : 5th - 7th October, at Hotel Ashok, Chanakyapuri @bridalasia . Outfit: @ritikamirchandani Jewellery : @raniwala 1881 . Shot by : @arjun.mark Styled by : @mohitrai Set and art Direction : @gopalikavirmani Hair and make up : @namratasoni Production : @mmcworld_official Coordinated by : @quirk_india @varunpratap_

A post shared by Bridal Asia Magazine (@thebridalasiamagazine) onJul 31, 2019 at 2:59am PDT

Photographer Arjun Mark also took to social media and shared a video giving fans a glimpse of Sonam’s other looks from the shoot. Check it out.

On the work front, Sonam was last seen in  in Shelly Chopra Dhar’s Ek Ladki Ko Dekha Toh Aisa Laga alongside Anil Kapoor, Raj Kummar Rao, and Juhi Chawla. Her next movie in line is The Zoya Factor, which stars Dulquer Salmaan. Directed by Abhishek Sharma, the film is based on Anuja Chauhan's bestselling novel of the same name. It is set to hit the screens on September 20.