Cannes 2019: Sonam Kapoor's Behind The Scenes Moments Give Sneak Peek To Her Dressing Room!

She arrived late but owned the Cannes events Completely! Her red carpet look was stunning but this sneak peek to her dressing room has left us wanting... 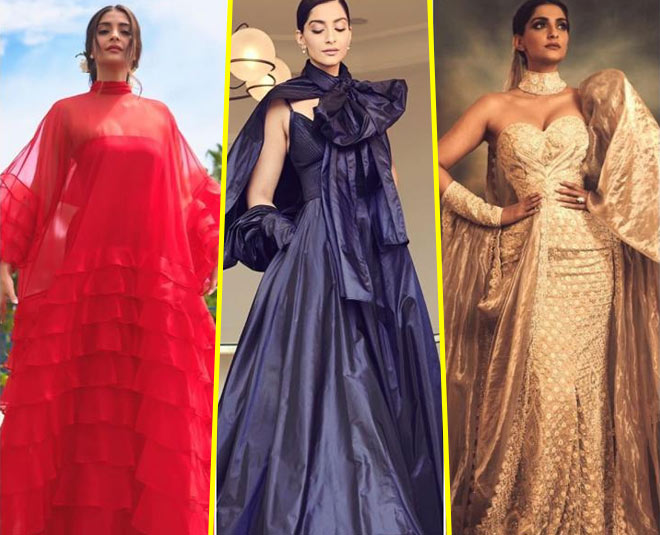 Sonam Kapoor has always been known for her fashion statements. Be it in the films, regular events, Cannes... She stands out every time! This time the "Khoobsurat" actress has treated her fans to a beautifully made video, giving a sneak peek to her dressing room, while she got ready to rock the red carpet and Chopard party. These Behind The Scenes videos from Cannes 2019 have left us asking for more.

One of the videos shared by Sonam Kapoor on her Instagram handle shows her getting ready and how for the Chopard party where she stunned us all in a neon yellow gown by Ashi Studio. The stilettos worn with the flared off-shoulder gown was paired beautifully! Some even labelled her look like that of a ‘modern maharani’.

There is no greater luxury than sustainability. @chopard #chopardparfums 🎥 @shakeelbinafzal

The second video shows the "Neerja" star in a white dressing gown and later she is seen wearing a yellow gown. This is when she launched a new range of Chopard perfumes. She captioned the video: “There is no greater luxury than sustainability. Chopard #chopardparfums... Beauty begins the moment you decide to be yourself. Coco Chanel, Abujanisandeepkhosla".

Beauty begins the moment you decide to be yourself. Coco Chanel 🎥 @shakeelbinafzal @chopard @abujanisandeepkhosla #chopardparfums

Sonam and her sister-producer-designer, Rhea Kapoor, are being raved about at the 72nd edition of Cannes Film Festival, with Rhea styling her sister’s looks for various appearances, including the ones at the red carpet. This indeed makes us feel proud so we wonder what her father and actor Anil Kapoor might be feeling! Rhea has styles Sonam at a number of occasions and also worked with the award-winning actress as a producer in films "Aisha", Fawad Khan-starrer "Khoobsurat" and the multi-starrer "Veere Di Wedding".

Speaking of the proud feeling, Anil Kapoor shared a collage of Sonam’s different looks at the French Riviera and wrote, “Taking the world by storm, one outfit at a time! So proud of my girls for creating art with fashion! @sonamakapoor @RheaKapoor, Love the looks and the brains behind them! #proudfathermoment.” Actor Anupam Kher, who worked with Sonam in the film "Mausam", also liked the tweet.

Taking the world by storm, one outfit at a time! So proud of my girls for creating art with fashion! @sonamakapoor @RheaKapoor, Love the looks and the brains behind them! #proudfathermoment pic.twitter.com/qn4NLZbYnd

The actor’s first look at Cannes 2019 was in a red dress by Valentino. She later went to the Chopard party looking like a goddess. She also showcased a neon yellow gown by Ashi Studio. The flared off-shoulder gown was paired with matching stilettos. Sonam then donned an ivory white Ralph & Russo tuxedo dress which had a long train on her second day at the red carpet of the Cannes film festival, and wrote: “The French Riviera suits me.”

On the work front, Sonam was last seen in "Ek Ladki Ko Dekha To Aisa Laga" with Anil Kapoor and Rajkummar Rao. Talking about what's in the pipeline, Sonam will next be seen in "The Zoya Factory" which is based on Anuja Chauhan’s book by the same name.