Fimfare Awards 2019: Alia Wore Something Hatke But What Is Your Take?

The "Gully Boy" actress wore a gown from Ralph and Russo's Fall 2018 Haute Couture collection, but it sure got some mixed reactions. Let's take a look. She looked stunning in a couture dress last night! It was different from her style and she dazzled like the Best Female Actress In A Leading Role should! Alia wore a gown by Ralph and Russo but people still have very mixed reactions on the way she looked.

The "Gully Boy" actress wore a gown from Ralph and Russo's Fall 2018 Haute Couture collection. Her black, beaded gown had a nude corset bodice which fit her like a glove. It seemed to have a galaxy inspired embroidery and well we all know that she can carry off anything! Since her ensemble was a statement in itself, she made the wise decision of giving jewellery a miss.

Her makeup was just perfect! The smokey eyes, nude lip and hair worn in an unkempt bun made her look stunning! Styled by Amy Patel, Mala_agnani and assisted by Garima Garg, Alia's hair was done by Priyanka Borkar. The gorgeous make-up was done by Puneet B Saini.

While some agreed with us on social media, some individuals thought that the nude corset look is Malaika Arora's forte. A fan of Deepika Padukone, clearly, wrote on Instagram that "Alia is looking so old... don't copy DP (Deepika Padukone) ... It only suits her." 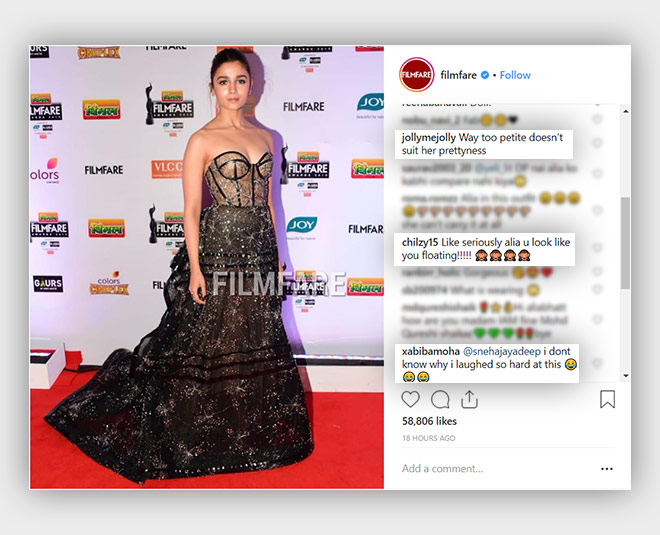 Some Instagrammers also wrote that she is "wearing a weird dress" and that they "feel like laughing" and that the dress is "Way too petite doesn’t suit her prettiness". On the work front, Alia is gearing up for 'Kalank' promotions, which also stars Sanjay Dutt, Madhuri Dixit, Varun Dhawan, Sonakshi Sinha and Aditya Roy Kapoor. Set to release in April, the project is a period drama film directed by Abhishek Varman and produced by Karan Johar, Sajid Nadiadwala and Fox Star Studios. The film is set in pre-partition India and Alia's first look in complete ethnic has our attention for sure!

Her other projects in the line include Karan Johar's "Student of the Year 2" and "Brahmastra" with Ranbir. She is also on board for "RRR" which is an upcoming Telugu Historical fiction film scripted and directed by S. S. Rajamouli. It will also have N. T. Rama Rao Jr., Ram Charan, Alia and Ajay Devgn in a cameo.

Don't Miss: Gully Boy Actor Alia Bhatt Is The Queen Of No Makeup Looks And We Have Proof

The film is based on the lives of freedom fighters, Alluri Sitarama Raju and Komaram Bheem who were fighting against the British Raj and the Nizam of Hyderabad. Made on a confirmed budget of Rs 300 crore, the storyline of the film is a fictional retelling of their life during their self-imposed exile.