Anushka Sharma looks ethereal as she dresses up as a bride for a photoshoot. Check out her photo! 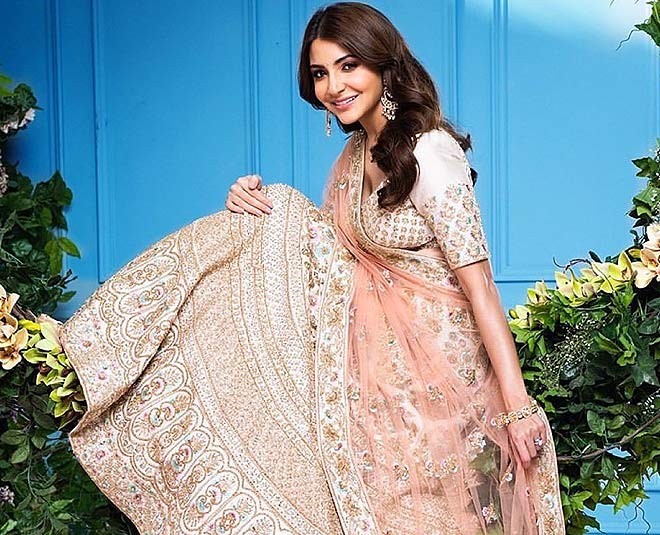 With Aditya Chopra's Rab Ne Bana Di Jodi, Anushka Sharma stepped foot in the film industry and instantly became everyone's favourite. Apart from impressing the audience with her spectacular performances in films like NH10, PK, Pari, Jad Harry Met Sejal and many more, Anushka has also established herself as a trendsetter and has been ruling the fashion industry with her uber-chic sense of style. Recently, the actress shared an image from her latest bridal photoshoot and oh boy, she left spellbound!

#Repost • @moheyfashion turns every occasion into priceless memories. 🌟 Check-out all their beautiful lehengas and more only at @moheyfashion.

For the glam, Anushka's hair were centered parted and given wavy curls giving out a diva vibe. She went with dewy makeup that included mauve lips, kohl-rimmed eyes, light hint of blush and shimmery eyeshadow.

Anushka's this look reminds us of her dreamy wedding, when she looked no less than a dream in the bridal avatar. The actress tied a knot with Virat in 2018. She wore a beautiful pink Sabyasachi bridal lehenga for her wedding, which went on to become a must-have in every bridal trousseau.

When elegance marries excellence. When timeless traditions matches the mood for modernity - ‘Mohey’ strikes a perfect balance between the two by radiating nothing but finesse. Head to the nearest Mohey store to explore our exclusive collection. #MoheyByManyavar #ManyavarMohey . . . . . #IndianWear #IndianBride #IndianFashion #IndianWedding #EthnicWear #Lehenga #BridalWear

Earlier this week, the diva set the internet on fire with a tangerine bikini picture. She wore a retro orange bikini with white and lilac stripes. Gold drop earrings and chic sunglasses rounded off her look.

On the work front, Anushka was last seen in Aanand L.Rai’s Zero along with Shah Rukh Khan and Katrina Kaif. Though she has not yet signed a film after its release, she is busy with production. Her production house will serve as executive producers on the Netflix original series Mai.