Anushka Sharma was soaring mercury in Antigua in a ravishing orange bikini. 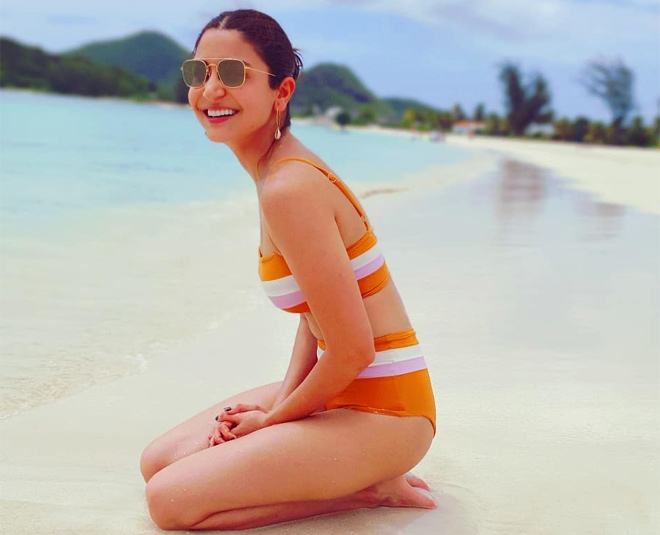 Anushka Sharma, who is on a short break, is recently spending some quality time with her beau, Virat Kohli. The actress has accomapnied her husband Virat Kohli to the Caribbean Island, where he is leading the Indian cricket team on West Indies tour 2019.

Taking to Instagram, Anushka shared a “sun kissed” picture from her recent vacation. In the picture, Anushka is seen donning a retro orange bikini with white and lilac stripes. The 37-year-old actress was seen kneeling by the seashore with her hair tied into a bun and chic sunglasses.

To glam up her look, she accessorised her look with a pair of gold drop earrings. She shared the picture with the caption, “Sun kissed & blessed.”

While we are mesmerized with the diva's beauty, Anushka's beau, Virat is also lovestruck too. He dropped a heart and lovestruck emoticons on her post. Check out his adorable comment below: The couple tied the knot in 2017, and since then, the two have been giving us major relationship goals and leaving us gushing over their chemistry.

Don't Miss: This Is How Virat, Anushka Keep Their Relationship Healthier

Today we have promised each other to be bound in love forever. We are truly blessed to share the news with you. This beautiful day will be made more special with the love and support of our family of fans & well wishers. Thank you for being such an important part of our journey.

In an interview with an entertainment portal, Anushka recently opened up on being married to the love of her life. "I'm married to my best friend. I'm married to my confidant. I'm married to someone I love so dearly just because of the human being that he is. You talk about being misunderstood in life and then you meet someone, who understands you completely. Then the world doesn't exist," said Anushka.

"So for him and me, when we're together, the world ceases to exist. We find solace in one another because of the similarities we share as people. Even when we were dating each other, it was the same thing. I feel extremely happy because he's my family," she added.

On the work front, Anushka was last seen in Aanand L.Rai’s Zero along with Shah Rukh Khan and Katrina Kaif.