Three women umpires have been selected to officiate the Ranji Trophy for the first time.

Women will soon be permitted to officiate at the Ranji Trophy and this is just the start for women umpires to enter elite cricketing tournaments. “The BCCI has decided to give them an opportunity in the men’s game too,” said a BCCI official to The Indian Express. 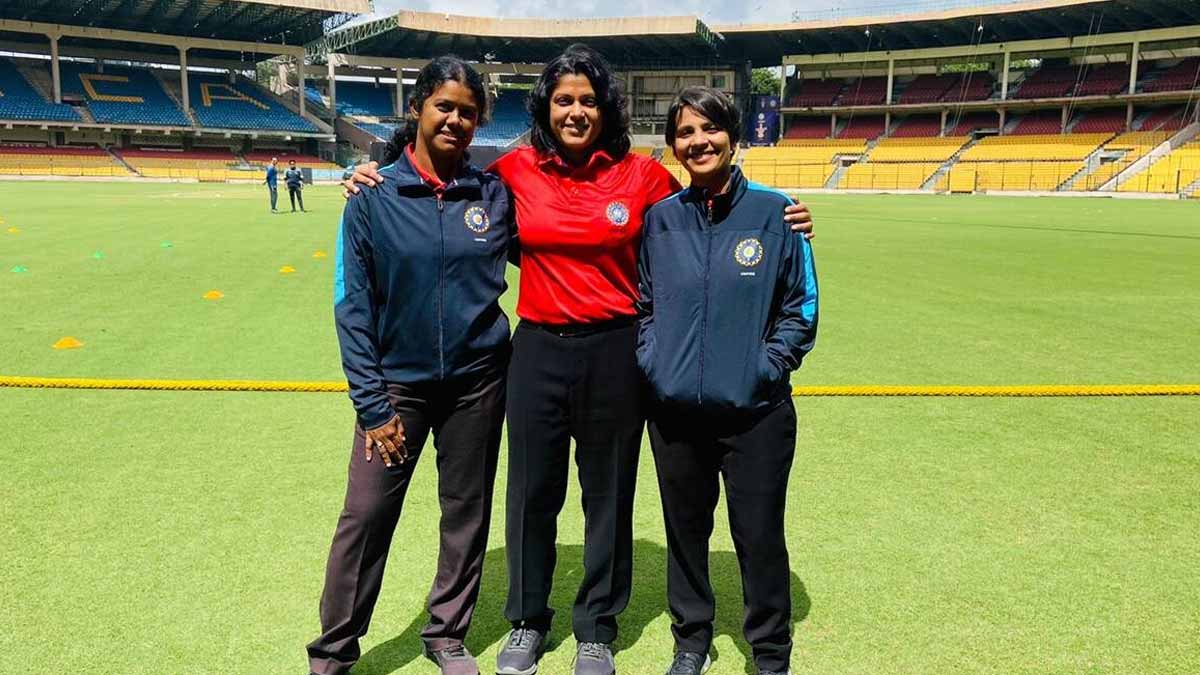 Vrinda Rathi was a regular scorer on Mumbai’s fields, but a coincidental meeting with Kathy Cross, an umpire for the New Zealand international team, motivated her to enter the 22-yard line. Gayathri Venugopalan’s dreams of playing professional cricket were broken due to a shoulder injury, but after passing BCCI’s umpiring exam, she continued to play centre field. Meanwhile, Chennai-based software engineer Janani Narayanan quit her job when the Tamil Nadu Cricket Association (TNCA) invited applications for umpire positions.

Since the Indian board chose to draft women umpires in the men’s homegrown circuit, the three trailblazers will administer on-field for the Ranji Trophy. “Rathi, Narayanan, and Venugopalan will start from Round 2 of the tournament after missing the first leg of the games that start next week because they will be officiating in the India-Australia women’s T20I series,” added the BCCI official.

Cricket fans are awaiting an official announcement from the BCCI. Several state associations draft women to officiate men’s local games, except for women’s cricket. However, the BCCI has never given women the chance to serve as on-field umpires in men’s senior tournaments up until now.

Regulars on the circuit claim to know of the three women pioneers about to make history, but Indian board-contracted umpires have been told to not interact with the media.

More about the women umpires

Rathi, 32, was earlier a medium pacer who played for Mumbai University. She passed the BCCI exam for scorers in 2010 and became a regular scorer in Mumbai’s local matches. On meeting the New Zealand umpire in 2013, she was the official BCCI scorer for the women’s World Cup. She passed both the BCCI exam and the Mumbai Cricket Association exam.

The 36-year-old Narayanan was always passionate about cricket but never played it seriously. The local officials were pleasantly surprised when she approached the TNCA in 2009 and 2012 for an application to become an umpire. She was given a form when the state association finally changed its rules and perceptions in 2015. She quit her IT job in 2018 after passing the Level 2 umpiring exam offered by the BCCI.

Venugopalan, 43, is living her dream of being in cricket after giving an umpiring exam in 2019. Her shoulder injury made her unable to play professional cricket, but being an umpire empowered her.

Previously, Rathi and Narayanan have officiated the CK Nayudu Trophy games for under-23 boys, but this time, they will finally make their name in the prestigious Ranji Trophy games.