Taapsee gets candid with Neha Dhupia on #NoFilterNeha Season 4, talks about what she feels about Jacqueline Fernandez, Vicky Kaushal. 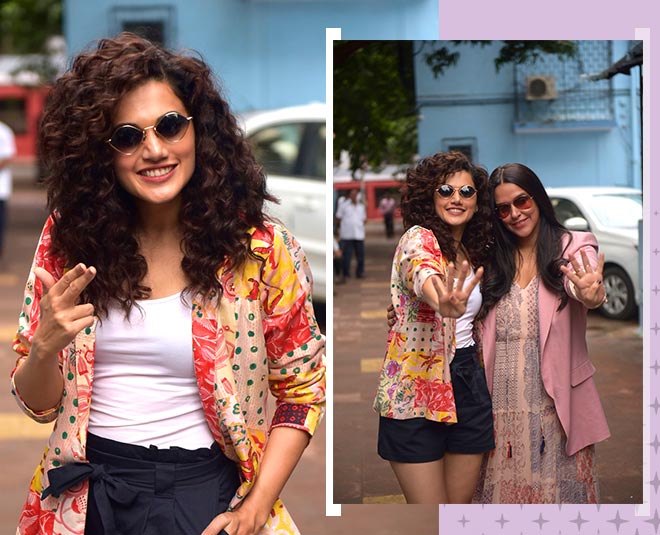 Taapsee Pannu, who will soon be seen on Neha Dhupia's #NoFilterNeha Season 4, spilled beans on what she feels about her Judwa 2 co-star Jacqueline Fernandez, Vicky Kaushal, her most embarrassing moment, her take on Kangana Ranaut's sister Rangoli Chandel's reaction to 'Saand Ki Aankh' and more on the show. Without changing anything, here is exactly what she was asked by Neha and what she shared.

Gender Inequality In The Business

Rules are quite unfair, not just in our industry but maybe in every other industry. Because we are here, we see it more. But rules are different everywhere. And that’s what the fight is for, that’s what the struggle is right now, the whole issue of gender equality is that let’s make the rules equal. I’m not asking for an edge over them, I’m asking for equality. I’m hoping with Saand Ki Aankh and the response we are getting, it’s a step closer to that equality in one way or the other.

For example, we never had a big female led Diwali release, I don’t know when did it happen last, it was always reserved for big heroes, the clash happened between two heroes. You know, when we see a calendar and we decide a release date for a female led film, we have to settle with leftovers, I’m not even kidding when I’m telling you that because I’ve done so many of them. We just sit on the calendar and we figure out, accha yeh din ke baad, yeh week khali pada hai, yahan pe kar lete hai.

It actually happens like that, which is so disheartening because we also put equal amount of effort if not more and our stories are also beautiful so why not get an equal chance? Just because it’s a female led film? Is that reason enough for you to not come on a big date? Diwali we celebrate Laxmi and you know all the goddesses that we pray to, high time someone takes the step. Maybe I win, maybe I lose, but at least I will take one step to see if I can make the difference.

See, first of all, when I took up this film, I honestly thought that I would be appreciated for doing such a film or taking this step because generally, all actresses conventionally don’t like to become mothers or grandmothers, or don’t like to look so de-glammed in a film. I thought that it’s going to be in my favour but clearly not because of some people. But with her, whatever I do that makes an impact will attract a certain kind of attention from her is what I have realised lately.

Which is okay, it means that I am making an impact. I didn’t bother replying until I saw actresses like Neena ma’am talking about the same thing and I really respect and love her because I have worked with her in Mulk as well, I know her. So that’s when I decided to answer back by giving examples of the fact that how many times before has it happened that younger actors have become older like Saransh for that matter, Mahaan for that matter. We have such brilliant actors aging double, triple their age and that’s been okay and we have anti-ageing also happening at the same time, someone like Aamir in 3 Idiots so we’ve been all fine with that and enjoying and celebrating that as actors so why target me?

The secret of how Taapsee gets instigated

Either become someone really close to me to affect me that way and then expect an answer of that sort otherwise I will really not bother because you don’t really matter to me. You can keep saying whatever you want, it won’t affect me.

Why doesn’t Taapsee talk about her current boyfriend – Mathias Boe?

Too much will be written and said about it which will overtake my professional life.

Beach, somewhere on the beach

Taapsee’s badminton team’s lucky charm is her being in the toilet!

Because that seems to be the lucky charm for the team! The moment I went inside the toilet, the team started scoring points. I’m ready to sit in the loo for the longest ever time if they are going to win all the matches like that, trust me on that.

Taapsee says she dislikes people who slyly take her pictures

I am aggressive in my life pertaining to a certain people or certain situations. So In between my Manmarziyaan schedule when I had a little break, I came down to meet my sister and we were going out for dinner and standing out for our car and there was this guy on a bike. In a very sly way take out phone and click a picture, not even ask or you know nothing. And I saw it.

I get usually very mad when people try to do that because I feel we are public figure not public property. There is a difference. This guy takes out the phone and I…it triggered something in me and I was like 'phone andar rakle nahi toh phone tod dungi'.

I said it out and then everyone around me reacted in such a weird way. It’s like 'Taapsee iske saath nahi hai, hum iske saath nahi hai'. And they started getting, they scattered around, it was like 'ki hum iske saath hai hi nahi'. And I realised that okay I reacted way too much. It just organically came out because I was in that aggressive zone at that time.

Sometimes people just shove their phones into our faces and come way too close for proximity to click pictures, which almost makes us feel like we don't really have a say on what we want or what we feel or what we wanna do. I mean I love the fact that you are the ones who make us a star or buy our tickets, I totally respect that but having said that I'm also as normal a human being as anyone else.

The one thing Taapsee hates: Rampwalk!

I hate it. I don’t hate it but I detest it because I know I will trip, I will fall, some big calamity will happen when I’m walking on the ramp.

When she was house hunting

All these details are given to you when you're trying to find a house, apartment in Bombay to stay. So if you have to go and find a house in Juhu somewhere, they say 'ki Hrithik Roshan  ka ghar baaju mein hai, woh balcony mein yaha pe dikte hai kabhi kabhi and then the current apartment or the society I live in has Ayushmann. So the moment I entered, they're like Ayushmann stays here. I was like that's not gonna be my reason to buy the apartment.

That apartment I stay in I keep making fun of the fact that 'agar mein top floor se neeche tak aau na puri picture set ho sakti hai, it has producer, director, music director, singers, writers, everyone in that building.

The most embarrassing moment of Taapsee’s life

That was by far the most embarrassing moment of my life. And trust me, the hotel must be having the footage of that and if that get released, I don’t know where I’ll hide. So there was a big water body kind of a thing, not a running fountain but a water body in the middle of that hotel in Hyderabad and there was a shortcut to the toilet and there was a long cut or around that water body. So I was like who will walk all the way around, I will take the shortcut.

The shortcut required me to put one step on to the corner of that water body and jump on to the other side. I stepped on it thinking that ya I’m sporty enough to just quickly jump. And I slipped and I landed inside that water body! Facing the ceiling, I was lying down there in my pyjamas in that water body drenched from head to toe, dripping!

The funniest thing is not just that I am lying there in the middle of fountain thing but there’s a table right next to me, there are two people sitting there at the table, they are just so flabbergasted looking at me they don’t even blink, they don’t even get up to help me! They’re just shocked seeing me there inside!

Don't Miss: Are You A Saree Fan? Here Is Taapsee Pannu Experimenting With Cool Draping Styles For Inspo!

Taapsee says Badla will be called an Amitabh Bachchan film 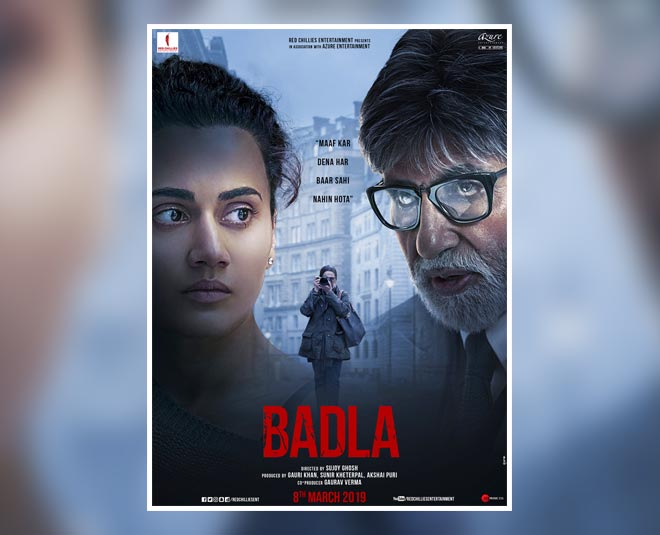 Even when I do films like Badla, I had more working days or scenes so to say than Mr. Bachchan. He was the hero of the film, I was the antagonist. But the antagonist has more presence in the film than the protagonist. But eventually the film releases, they call it an Amitabh Bachchan film. Yes, when I raise my voice and say I’ve done almost equal if not more, that’s when people recognised and started taking my name because it’s such a male-dominated industry, they don’t even realise that I might have done more work actually.

It was called Sir’s film, it won’t be called a female film regardless of the fact that I have more scenes, it will be called an Amitabh Bachchan film and the credit will go there. That’s why my pay will not increase as much as it will increase after Saand Ki Aankh.

It hurts me to see this disparity but I’m not going to be unreasonable and ask for an equal amount of money right away, I would rather wait and do things to equalize the box office and then expect them to pay me and honestly, they will. They are happily paying me because I am sensibly raising it, not just wanting to equalise it right away but balancing it with my box office success.

Worst co-star according to Taapsee? 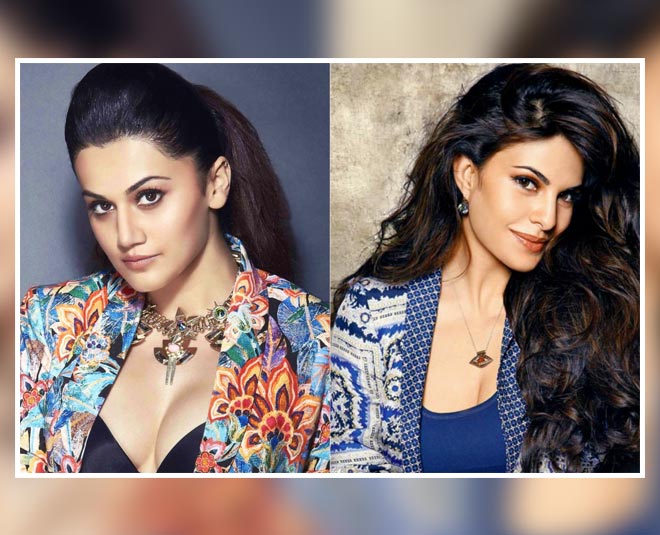 I'll say two of them - Jacqueline because she is so freaking hot and hot body, which I was struggling to match up to it in Judwaa 2 and I was like I just hope I don’t put myself to shame.

And the other one which I had a difficult time, which I told also is Vicky because I was always so conscious that I should not lose out to him in the scene because he is just so good.