Swarna Ghar's dupatta scene in which the hero rescued a woman from being strangled by an electric fan, got us all LOL.

With their completely bizarre and irrational episodes, Indian television has made us giggle uncontrollably countless times. This time, it was a scene from Colors TV show Swaran Ghar that had us laughing out loud.

In this scene, the hero saved a woman from being strangled by an electric fan that had a woman's dupatta stuck in it. The hero saved the woman's life by ripping the dupatta with his mouth rather than using any other reasonable way. This scene went viral on social media and everyone couldn't stop laughing. Watching this scene Kamya Punjabi also criticized the scene. However, reacting to getting trolled and slamming Kamya Panjabi for her response, the lead actress of the show Sangita Ghosh shared a note on her Instagram page.

What Was The Logic- Less Swaran Ghar Scene That Got Trolled?

On May 13, the Colors TV show Swaran Ghar aired a bizarre scene which went viral in no time. It showed an utterly hilarious-without-logic scene, which made  us LOL.

The clip showed the lead actress Swarna throwing her dupatta across her shoulders, which gets caught in between the moving electric fan.  She then gets pulled with force and her neck suffocates as her nose tightens. Everyone rushes towards her in an attempt to free her. Watching her struggle with life, the opposite lead Ajit comes to the rescue. He saves Swarna by biting the dupatta and ripping it apart rather than using a simpler and more logical method.

Don't miss: Did You Notice These Major Flaws In The Plot Of Your Favourite Daily Soaps?

The viral clip of Swaran Ghar feauturing illogical dupatta- fan scene also caught the eyes of actress-turned-politician Kamya Panjabi. Taking to her Twitter handle, she wrote, "This is precisely why despite having some brilliant actors TV content is looked down upon, compared to Films and web."

The tweet was also retweeted by actress Kavita Kaushik.

This is precisely why despite having some brilliant actors TV content is looked down upon, compared to Films and web. https://t.co/JHvRjw8mMF

Reacting to all the trolling, actress Sangita Ghosh shared a note on her Instagram handle. She wrote, "I take everything with a pinch of salt and did the same with this video. I think when your audience gives you so much love and appreciation, they also have the right to criticise. I told everyone on the set that at least hum viral hogaye (we went viral). We do make mistakes in life and shows. One has to move on/ eventually the intention and the execution did not come out the way it was planned. The team has already realised where they went wrong. And as actors, we do not have the last word but I think everyone will be careful next time."

Adding to the post, she wrote, "The show is a progressive one and has been lauded for its content. Yes, we faltered but that doesn’t mean we are not doing good work. Television has been instrumental in taking up so many sensitive topics. I, myself, have done some amazing work

Don't miss: How Do TV Soaps Impact The Way Women Are Perceived In The Society?

In the same post, Sangita Ghosh added in the second and third picture of the sequence criticizing Kamya Punjabi's Tweet about the same clip.

Sharing the screenshot of Kamya Punjabi's statement, she wrote, "What a shame the person who works in the industry himself is saying such a thing."

Adding to the same, she said, "The one who works for TV, considers TV less than OTT and films, what should I say?" 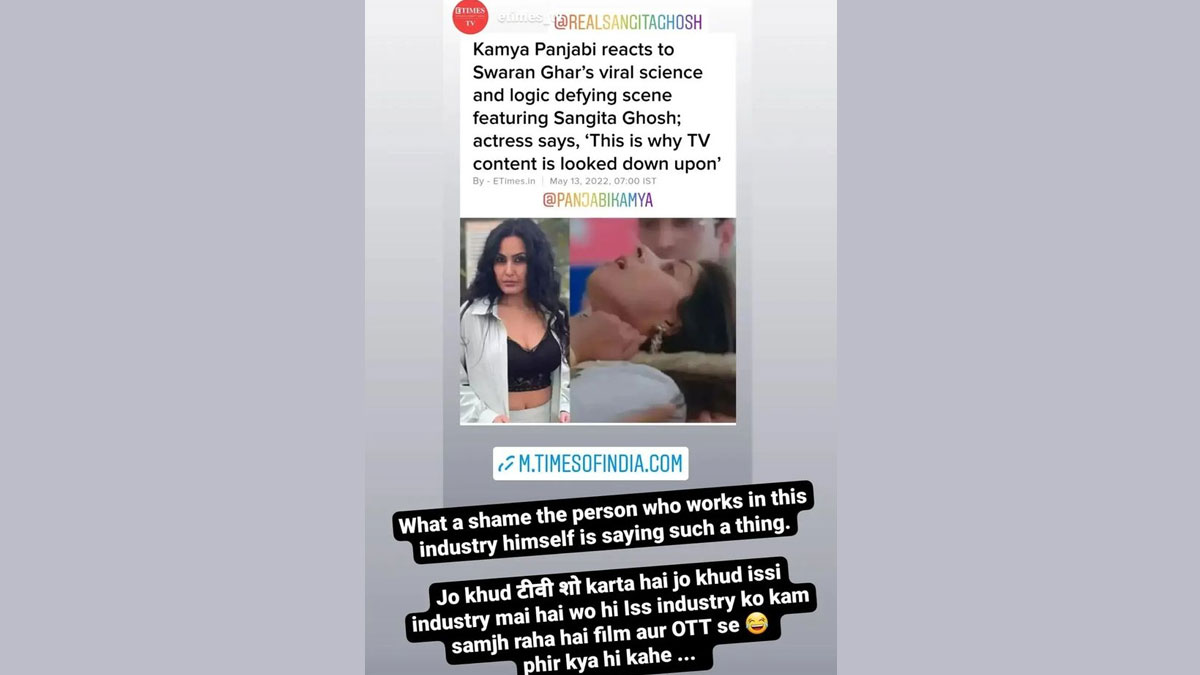 In the next image of the sequence, she wrote, "TV shows are not deemed less, nor will they ever be considered any less. Drama is there in everything -- be it film or OTT. All the three things are for the entertainment of the audience and it is a shame that a person who works in the TV industry is looking down upon it." 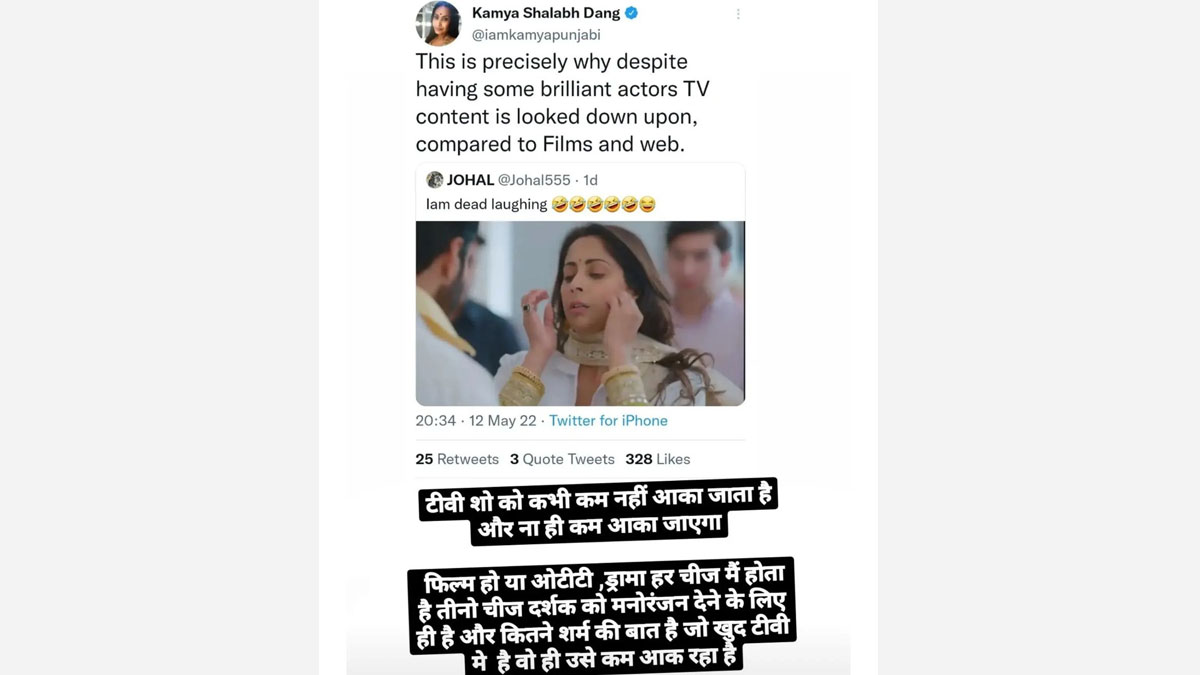 Did you see the viral video? How was your reaction to it? Share your thoughts with us by commenting on our Facebook page.