Mira Rajput Proves She Is A Pro At Pulling Off Kid’s Birthday Parties, Share Details

Are you scratching your head wondering how will you pull off your kid’s quarantine birthday party? Read on to take cues from none other than Mira Rajp... One cannot deny being a mom is one of the toughest jobs. There are endless responsibilities and management involved to give kids the best upbringing. This not only involves teaching them moral values, giving them education and providing healthy food but also celebrating festivals and of course their birthdays.

On September 5, Mira Rajput’s younger child, Zain turned a year older and Mira threw him an amazing theme-packed birthday. She shared the glimpses of the same on her social media handle. Mira also revealed in a post that how difficult it was to pull herself together for her son’s birthday that falls almost 10 days after her daughter’s birthday. While she says that it was “good old mom guilt” that kept her going, all the mothers out there can understand how exhausting the whole situation can become. “After planning a detailed, game intensive and theme-packed birthday for the lady of the house, I was quite lazy to get up and do yet another one in ten days! But nothing like Pinterest and good old mom-guilt to get you right back on your toes to start all over again,” said Mira on one of her IG posts.

When we took a closer look at the snaps from the construction-themed birthday party, we were blown away. Good for us, Mira shared details of how she organised her “buddy boy’s” birthday, who “is obsessed with anything that goes vroom: trucks, bikes, tractors, cars, fire engines and his most favourite the JCB Digger,” revealed Mira. Here’s how the celebrity wife made arrangements for the party!

Another Quarantine Birthday 🎂 After planning a detailed, game intensive and theme-packed birthday for the lady of the house, I was quite lazy to get up and do yet another one in ten days! But nothing like Pinterest and good old mom-guilt to get you right back on your toes to start all over again. Buddy boy is obsessed with anything that goes vroom: trucks, bikes, tractors, cars, fire engines and his most favourite the JCB Digger. You can catch him in the hot summer afternoon playing with his trucks in the mud totally and utterly in a state of bliss. So this theme combined his love for both vehicles and construction (also because it was just easier to widen the theme basket a bit and I was in love with the tractor shaped napkins😜) I used whatever creativity I had left to deck up the place and inflated a pool for the entertainment. All parents know that nothing keeps kids engaged longer than a pool with a side of fries. A trunk full of cars, my decoration box and the cutest printables made the whole theme come together. I managed to get the backdrop online along with the pun-intended signboards. Caution tape and digger toothpicks brought the whole theme together. I forgot to click a picture of the returns which was my favourite go-to wrapping; newspaper with caution tape wrapped all around. We reused the tassels from last time and kept theme colours to match the decor. I found that going for a solid coloured plate with themed napkin makes for a smarter solution. If you have extra leftover, you can use it for another celebration, dressed with a different napkin. By the time the sun went down, the kids were famished and happily exhausted, so it was a quick scurry around the table before the Khoi bag popped and confetti laden kids were off! This one was quick and easy! I’m sure all you Mum’s know those two words are GOLDEN when it comes to a birthday!

Mira Saved & Re-Used Many Items From Other Celebrations 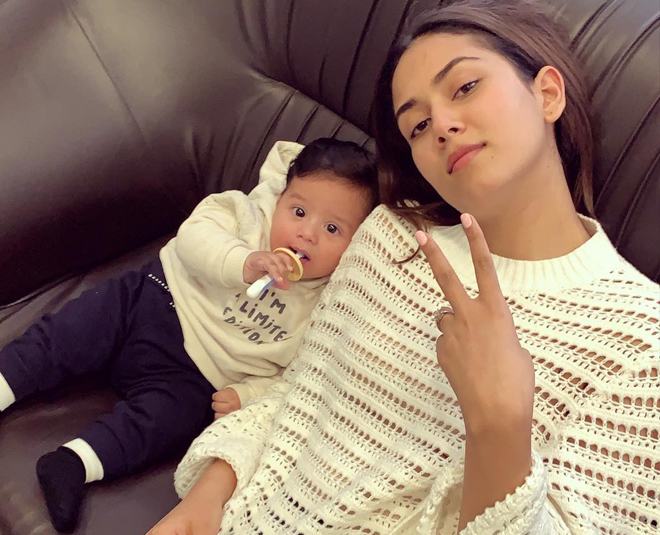 If you thought reusing old décor items is something that celebrity doesn’t do, now you know they also follow reusing mantra. Mira Rajput in her IG story revealed that she used “stuffs kept from previous birthday parties” along with ordering other things from an e-commerce website. She suggested her followers to “consider buying 2-3 different colour combinations of tassels. You’ll get longer strings and you can arrange them in the colour(ful) way you like.” 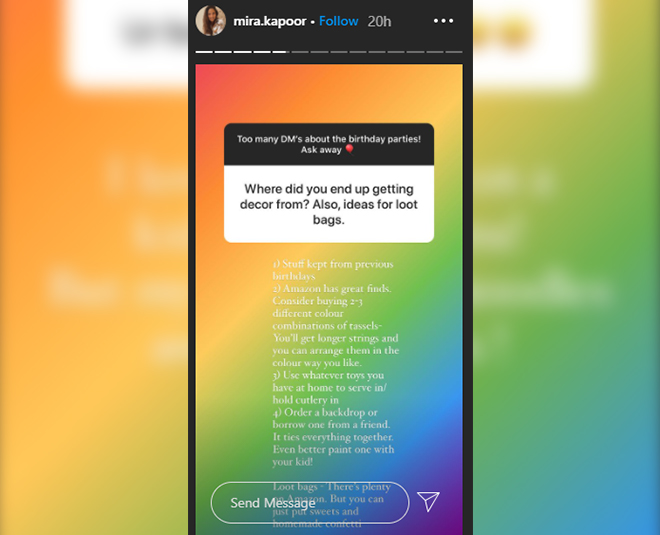 Not just us, even her fans loved construction themed packing paper. In fact, one of the IG users even asked her “where did she get it from?” The mom to two revealed she got it from a shop named “Studio Psd” that keeps high-quality personal stationery. For cutlery stand, she suggested a quirky yet fun idea. “Use whatever toys you have at home to serve in/hold cutlery in,” said Mira. We think it is cost-efficient and will work as that wow factor.

Quarantine Birthday 🎂 My kids’ birthdays are ten days apart and I had this dreamy idea when my son was born, that I’d combine their parties for as long as Khoi bags are interesting, and save myself the stress and planning that goes into kiddie parties. Because really, the unnecessary bar has been set quite high by too many, and some of them can be as tedious as weddings. And when better to economise on stress than during this time. Missy however had another plan in mind and complained to Papa that she wants a birthday of her own and doesn’t want to share her special day.. We caved and melted. For Misha, nothing tops Peppa. But instead of a full blown Peppa Fest, we made it kind of a technicolour carnival with bits of the lovable piggy. The decorations were all made by us and the fam (the DIY ones you get online) while watching some Netflix, as well as some I saved from her first birthday. The backdrop was a hand-me-down from my neice’s Peppa fiesta and cute printables brought the whole theme together from @studio_psd @printsolutionsdesign. It was so much fun, with musical chairs, a treasure hunt of weird Peppa erasers hidden all over in the garden, tug of war (Us vs the kids: no guesses on who won) and the good old Khoi bag. The menu must-have on my list was wafers and fruity along with the good ol’ party favourites that were pizza, noodles, Nutella sandwiches and jelly. It was all sorts of warm, fuzzy, and nostalgic! The kiddie birthday I always wanted to throw: intimate, full of memories and an after party mess 😜 ❤️🧡💛💚💙💜

One thing that gives that amazing birthday party vibes is beautiful tassel garland. While back in times our moms used to decorate with crepe paper tassels, now things have become fancier. Such as, the 26-year-old adorned her house using a colourful paper ice cream tassel that looked cute and cheerful. She saved them from her daughter, Misha’s first birthday and used it years after on Zain’s birthday. “I picked them up three years ago while travelling for Misha’s first birthday. Kept them since then,” said Mira in her IG story.

The construction-themed napkins added to the party décor and didn’t just look like something that has to be ultimately tossed away in the bin. While Mira’s son loves tractors and cars, she, on the other hand, adored these napkins and found it trouble-free to weave the birthday theme around it. “This theme combined his love for both vehicles and construction (also because it was just easier to widen the theme basket a bit and I was in love with the tractor shaped napkins),” said Mira Rajput, who got them from a store named, Party A La Carte.

Wallpapers (myths around usage of wallpapers at home)  can up the mood of the whole décor that you have done so far. You will have a corner to click pictures and it is also great for places that you want to hide from something. “Order a backdrop or borrow one from a friend. It ties everything together. Even better, paint one with your kid,” she suggested.