A man posts matrimonial ad seeking bride with specific breast, waist and feet size which shocked everyone. Read on to know more.

In India, using matrimonial advertisements to find a bride or groom is a common practice. People come across a variety of people here on a daily basis, of which, some are nice and some are weird.

Coming across weird and strange advertisements have become a norm now. However, a particular matrimonial ad posted on 'Betterhalf. ai' has shocked everyone.

A bizarre matrimonial ad was posted by a man on ‘Betterhalf. ai’, seeking a person with not just age bracket, but also with specific bra size, waist size, as well as preferred feet size. The person is also seeking values such as ‘conservative,’ ‘liberal,’ and ‘pro-life,’ from his prospective wife.

The person who rolled out this shameless ad specifies these details in the first 3 lines of the advertisement. But he did not stop there. He went on to ask if his companion must be “manicured/pedicured and fairly clean.”, without realizing how much his mind needs cleanliness.

Another demand goes like, “Your attire should be 80% casual and 20% formal, but should be into wearing costumes in bed.” These are some of the freaky demands the man made but it does not end there. Read the tweet by a twitter user @ThatNaimish who shared the screenshot of the bizarre ad.

Liberal but pro life. Boob size. Height and other requirements of this one Indian man on a matrimonial site! pic.twitter.com/xxljeXAHsG

Thank you for making us aware about this, we will look into the matter immediately.

After the ad got viral on social media, it received a bizarre response from the netizens, after which Betterhalf.ai responded to the tweet. The tweet said,

"Thank you for making us aware about this, we will look into the matter immediately."

"Necessary action has been taken against the user for violating our User Terms and Conditions. Thank you for bringing this to our notice".

Other Bizarre Matrimonial Ads That Cracked Us Up

Despite the fact that this matrimonial ad appears extremely disgusting,  it is not the first time we have come across such ads. The frequency of such instances have increased so much to the point that it only cracks us up every time now. Here are some other bizarre advertisements  that were posted while seeking a prospective wife. A hilarious add was posted on a newspaper where a person was looking for a non-feminist partner. Because they don't want strong-headed and opinionated women in their family who can shatter their centuries old patriarchy. The whole ad with specifications makes us laugh.

Don't miss: Some Toxic Traits In Men That Are Often Mistaken As Charming

2. An Ad Seeking Only Virgin Girl 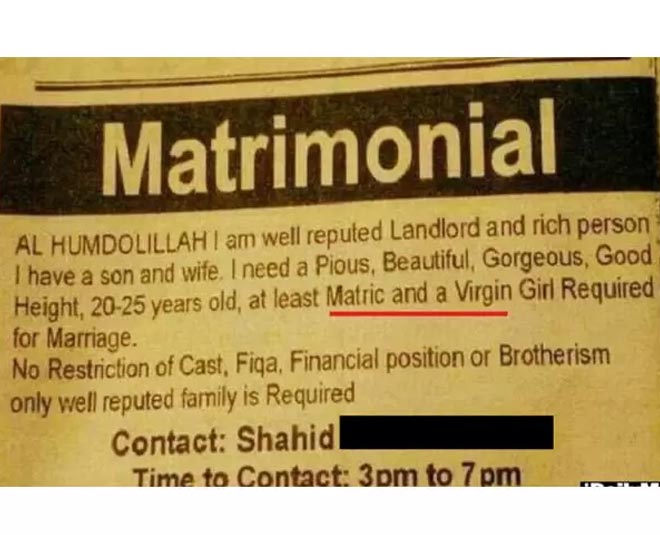 Another ad seeking a pious, beautiful, good height and virgin women along with other requirements for marriage is just hilarious. 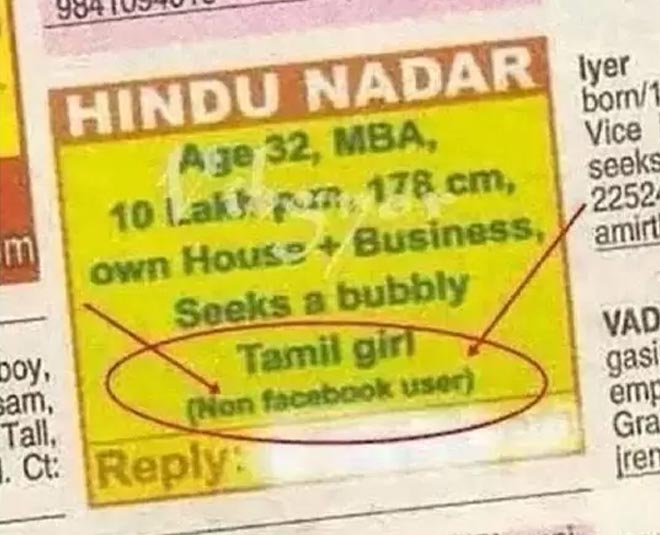 Expecting a girl to not use facebook to become eligible for marriage has become normal now and this is super hilarious.

Advertisements like these have grown common in our society, and while they make us laugh, they are also quite problematic, as they shames the entire womanhood.