Madhvi Pal is carrying her husband's business of idol making post his demise.

Durga Puja is incomplete without those majestic idols. A of design, produce goes into the preparation of these effigies for pujo pandals across the country.

For years now, artists have decdicated themselves to only making these idols. Idol making is a profession and traditionally, only men pursued it. However, in the recent times, we have seen a lot of women idol makers taking over.

Here, we will take you through the story of a woman idol maker. Her journey wasn't a regular one. Read on.

Madhvi Pal wasn't always into art and idol making but she stepped into the shoes of her husband after his demise.

After her husband died, she ended up being the only bread earner in the family. She had two children to take care of. Madhvi Pal didn't break but stood up strong after her husband's demise. She took the responsibility of the entire house for the survival of her family and got into idol making.

In an interview with ANI, Madhvi Pal shared,  “I started this in 2012 after my husband died. It was his business. I will continue doing this as long as I am alive." She shared that her husband's work was very famous and people knew him well. She has been trying to do justice to the legacy and putting in a lot of effort.

“When my husband died, the environment at my house was very depressing because he was the only bread-earner of my family. I have two kids, so after him, the responsibility laid on me and then I decided to carry forward his business because I was left the only provider of my family," she added.

Madhvi Pal sells the idols in villages like Tipudana and Ramgarh.

The Not So Easy Journey 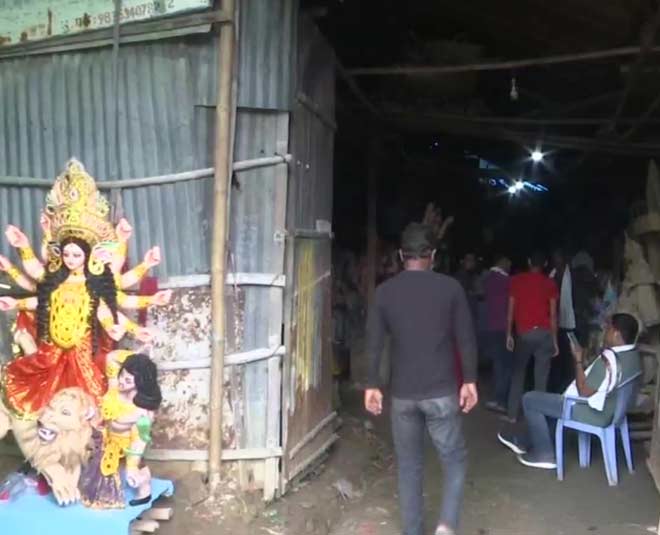 Though it took a lot of courage for Madhvi Pal to take up her husband's job, the journey wasn't very smooth ahead. In an interview with the news agency, she shared that the workers initially did not trust her, didn't know if she will be able to manage everything and pay them on time. However, she shared that she provided them with bonus along with their regular salary so that they can be happy. Madhvi Pal is among the list list of many other women who took up idol making after their fathers and husbands couldn't continue with the profession.

Kumartuli is one of the oldest workshop areas in Kolkata. The idol makers in this area are known for their Durga Maa creations. Many have been a part of the area for decades now. Among the many artisans who work here are - Mala Pal, China Pal and Kakoli Pal who are believed to be the first three women to have broken the stereotypes in the male dominated area. It took them a lot of time to be accepted by their male colleagues in the area.

In an interview, China Pal shared that her father didn't allow her to enter into this profession but she took training from him before his demise. Now she manages her father's studio and home.

Traditionally, women weren't allowed to get into art, esepcially idol making. In some parts of the country, they were stopped from doing so just because they were women.

Women like Madhvi Pal have managed to not only break such barriers but also taken their business to another level with their hardwork and commitment.

Madhvi Pal's journey is proof that dedication and hard work can help one reach any goal. Don't you think?

What are your thoughts on Madhvi Pal's journey to becoming an idol maker? Share with us on our Facebook page. For more such stories, stay tuned!