Indian Cricket Jersey And An Adorable Salute, Taimur Is ‘Cutest Fan Ever’ Of Men In Blue

Saif Ali Khan and Kareena Kapoor Khan's son, Taimur, who is vacationing with his parents in the UK, was photographed supporting Team India in a blue j... 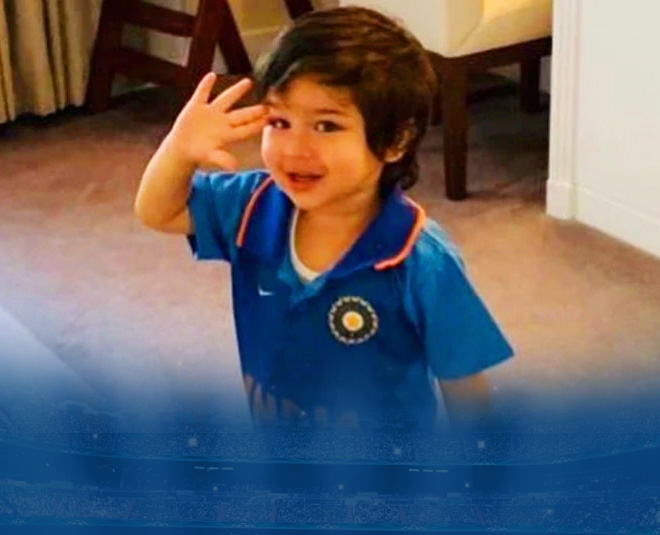 The cricket match between arch-rivals India and Pakistan on Sunday, June 16, 2019, at the ongoing ICC World Cup 2019 not only saw fans cheering for India but celebrities too left no stone unturned to extend their support to the team. Amidst all this, Taimur, son of Saif Ali Khan and Kareena Kapoor Khan, who is an internet sensation with a huge fan following at a mere two-and-a-half-year of age too supported the Men in Blue in the most adorable manner. Like most fans, Taimur too was equally excited about India playing against Pakistan and extended his support by wearing the blue team India jersey. The picture of this cute celeb kid is going viral on social media with fans going gaga over it. Yes! We agree that Taimur is the cutest supporter ever of Team India.

Taimur can be seen wearing a blue Indian jersey and posed for a picture while gesturing his hands in the form of a salute to the Indian Cricket Team.

Not to be outdone, his dad Saif Ali Khan, who was present at the match was seen celebrating with Alaia F who is all set to mark her Bollywood debut with 'Jawaani Jaaneman' where she will be playing the role of Saif's daughter. Alaia is the daughter of Pooja Bedi.

Don't Miss From Saagh To Idli, Here Is All What Kareena Makes Son Taimur Ali Khan Eat At Home

Taimur is currently in London on a vacation with his family. He is accompanied by his cousins Kiaan Raj Kapoor and Samaira Kapoor. Karisma Kapoor had recently shared a few pictures of their holiday on social media.

The Virat Kohli-led squad registered a comfortable 89-run win over Pakistan via Duckworth-Lewis-Stern (DLS) method. India had set a target of 337 runs for Pakistan at Old Trafford Stadium in Manchester on Sunday. Incidentally, Pakistan has never won against India at any of the World Cups ever and 2019 was no exception. With Sunday’s win, the Indian squad has now won all seven of their matches against Pakistan ever since they first met at the World Cup.

The viral celebrity kid, Taimur is born on December 20, 2016. You may be surprised to know that on Taimur's first birthday, mumma Kareena Kapoor Khan gifted him a forest of 100 trees 50 kilometers away from Mumbai in Sonave. The forest spread on a 1000 sq ft plot has banana, papaya, lemon, amla, jackfruit and jamun among others trees.