As The Tragedy King Of Bollywood Passes Away, Here Are The Celebrities That Arrived At His Home

Find out which celebrities visited the residence of the late actor Dilip Kumar, as he passes away. With the demise of the legendary actor Dilip Kumar, not just Bollywood but the entire nation is left heartbroken. As the tragedy king of the Hindi film industry passed away, according to the tweet of the Chief Minister of Maharastra, Uddhav Thackery, the last rites of the late actor were performed with full state honour and the burial took place at 5 PM at the Juhu Qabrastan. While countless actors and other known faces tweeted their grievances including Amitabh Bachchan, Salman Khan, Huma Qureshi, Ajay Devgan, Akshay Kumar, Subhash Ghai, and many more, we had been keeping a close watch on all those who were visiting the home of the actor and later visited the burial ceremony, given the covid situation in Maharashtra. Actress Vidya Balan along with her husband Siddharth Roy Kapoor arrived at Dilip Kumar’s home. While the couple paid their respects to the late actor, there were several other celebrities seen at the residence as well.

Read More About Dilip Kumar-  Dilip Kumar No More: Here Is All You Need To Know About The Net Worth Of The Legendary Actor Veteran actor Dharmendra paid a visit to the residence of the late actor Dilip Kumar. The duo had worked together in movies like Anokha Milan, Paari, and Jwaar Bhata. As Dharmendra arrived at the home of his close friend, Dilip Kumar, we can’t help but remember the times that Dharmendra had shared his pictures with Dilip Kumar, urging the fans to pray for his speedy recovery. As Bollywood loses an actor, Dharmendra lost a good friend.

Take A Look At His Work- Dilip Kumar Passes Away At 98, Here Are The Veteran Actor's Best Works Actor Raza Murad was also seen entering the house of late actor Dilip Kumar. He told the media that for him Dilip Kumar was not just an actor, but an institution as a whole, the university of acting. He also added that there is no actor that has not been inspired by the journey and the art of the late actor Dilip Kumar. He not only performed his characters but lived them. The duo had worked together in the movie Kanoon Apna Apna.

Ranbir Kapoor was also seen arriving at the residence to pay his respect to Dilip Kumar. The young actor was there not only to pay his tribute, but to also represent the bond that Rishi Kapoor and Raj Kapoor shared with Dilip Kumar.

The famous film director, Karan Johar, was also spotted as he got out of his car in a black kurta. Karan Johar also posted on his Instagram account a picture of the late actor and wrote, "His journey can never end because his legacy will always live on". The Burial Of Dilip Kumar 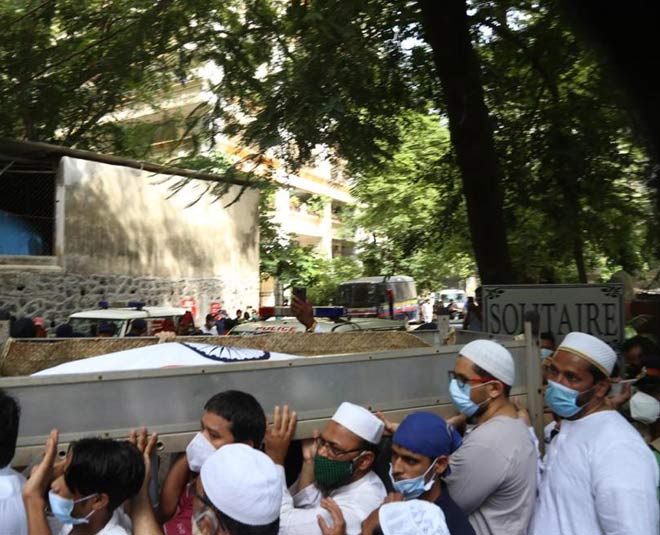 As they took the actor's corpse to the Santa Cruz cemetery in Juhu, we mourn the loss of not just an actor, but a true hero in every way. As mentioned by several of his colleagues and other celebrities, India has lost a gem. However, even though late Dilip Kumar is no longer among us, he has a permanent place in our hearts and several well wishes coming his way.

With teary eyes and heavy hearts, we bid a farewell to Dilip Kumar. May his soul rest in peace. Stay tuned to Her Zindagi for updates.