Wrestler Babita Phogat Gives Birth To A Baby Boy, Here's All About It

Doubling the joy of the season, wrestler Babita Phogat became a mom of a little baby boy yesterday. Here's more. 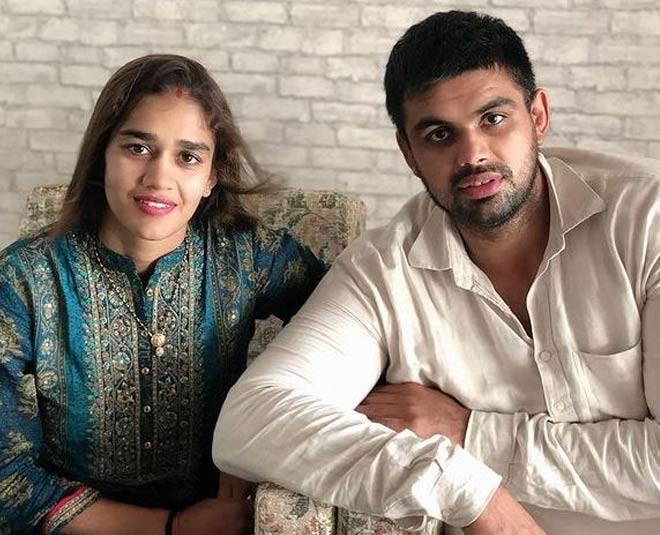 Just when we were celebrating the birth of Anushka and Virat Kohli’s first child, there was another good news waiting to embrace us all. The good news is that wrestlers Babita Phogat and Vivek Suhag also welcomed the phase of parenthood in their lives with the entry of their little one yesterday, a few hours after Anushka and Virat did.

Globally renowned wrestler, Babita Phogat spread the good news through a tweet on Twitter wherein she shared the picture of her baby and also posed with her beau to complete the family.  Let us take a look at more details about the tweet and more. The first picture of her child with her wherein she can be seen perfectly healthy and happy along with her newborn. While in the second picture we saw the entire family posing together, with Vivek, Babita, and the baby.

To caption their picture, Babita wrote, “Meet our little SONshine.”🧿 “Believe in dreams; they do come true. Ours came dressed in blue!”💙, after which, a lot of wishes from fans and close ones started pouring in for the beautiful couple and the baby boy. The announcement about the child was made earlier last year and almost a week later, we also saw some sneak peeks into Babita’s baby (how to give your baby spa at home)shower, where her sister and her friends were seen posing with the mom to be. The party was initially a surprise for Babita which perhaps turned out to be very pleasant, it was themed to be a gender equality party and Babita wrote: “Unexpected surprises from family and friends love u for what all u have done for me and Vivek. We both cherished every single moment of it. My gonna be a kid is the lucky one to have you all.” People became fans of Babita and Vivek’s simple love story that was built on connection and love at first sight. Earlier in 2014, Vivek and Babita saw each other for the very first time, then they kept meeting at their wrestling academy and both couldn’t help but feel connected to each other. Therefore, since their closeness had grown the couple decided to tie a knot and soon got engaged. In 2019 on the 1 of December, the couple finally got married to each other, fulfilling their heart’s most desired wish. It was in 2020, the beginning months, that Babita got pregnant(skin care tips for pregnant women) and announced the news through social media.

Also, a few months back the couple was spotted participating in the couple dance reality show where they seemed to have had impressed everyone with their innocent love story and entertaining performances. The icing on the cake was their super amazing chemistry.  After the show, the couple made it back in the news when Vivek gifted his beloved wife a luxurious car and she pictures posing against it in the backdrop.  We are very elated for this family and we wish them a happily ever after!