When one woman shatters stereotypes, it paves new pathways for women's empowerment. Read the story!

Breaking yet another stereotype, a woman qazi in New Delhi solemnised a Nikah (wedding ritual among Muslims). Dr. Syeda Saiyadain Hameed officiated all the rituals of the Nikah ceremony of our former President Zakir Husain’s great-grandson.

On Friday, a video of the wedding went viral on Twitter, breaking the internet. Comments poured in hailing the empowerment of women, and the video received thousands of views.

Syeda Saiyadain Hameed was a member of the Planning Commission. She took over as a qazi to perform the Nikah rituals of Rahman and Ursila Ali.

What Did Ms Hameed Say? In a statement, Ms Hameed said, "The terms set forth in the nikaahnama were prepared under the auspices of the Muslim Women's Forum, an organisation of which the groom's great-grandmother Begum Saeeda Khurshid was a founding president.”

According to reports, the bride initiated the concept of getting married by a female qazi, and the groom supported her decision. Rahman Ali said, “There was no concept of a female Qazi in the Indian Islamic society, so we want to make a new beginning, and when we talk about equality, then why not a female Qazi.”

Dr. Hameed said that the added significance of this Nikahnama is the Iqrarnama (agreement), which enlists the conditions mutually agreed upon by the bride and groom, pertaining to the equal rights and responsibilities along with respect and regard for all aspects of married life.

The Nikal happened in New Delhi at the residence of the third President of the country. Only families and close friends attended the ceremony. The qazi concluded the ceremony by calling on for the celebration of the union of bride and groom in the marriage of equals in a spiritual and legal partnership. 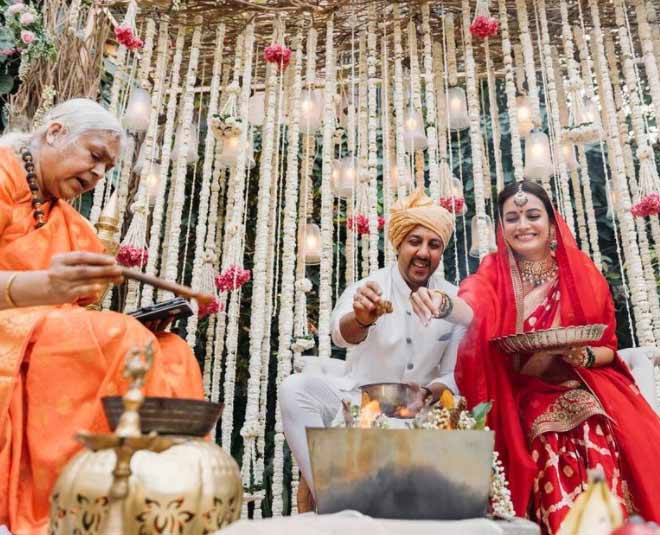 In 2021, Dia Mirza got married to Vaibhav Rekhi, and their wedding rituals were performed by a woman priest. Sheela Atta performed all the rituals for the ceremony, and the actress took to her Instagram to thank her.

Don't Miss: Here’s All About The Richest Women Of India!

She wrote, “The highest point for us was the Vedic ceremony conducted by a woman priest! I had never seen a woman performing a wedding ceremony until I attended my childhood friend Ananya’s wedding a few years ago.”

She added, “Ananya’s wedding gift to Vaibhav and me was to bring Sheela Atta, who is her aunt and also a priestess, to perform the ceremony for us.”

On Twitter, the actress wrote,  “Thank you Sheela Atta for conducting our wedding ceremony. So proud that together we can #RiseUp #GenerationEquality”.

Promoting more couples should opt for women priests, the actress said, “It is time for women to own their own agency, their divinity, their power and to redefine what is old and birth what is new.”

Don't Miss: Sterilisation And The Right Of Women To Choose Motherhood

Such instances restore our faith and pave new paths for women's empowerment (Chennai's First Dalit Woman Mayor). Seeing women shattering old and orthodox boundaries makes one optimistic about the future. We hope to see more such stereotype-breaking moments in future.