It is ‘The ChristMix Time’ At Crowne Plaza, Okhla, New Delhi 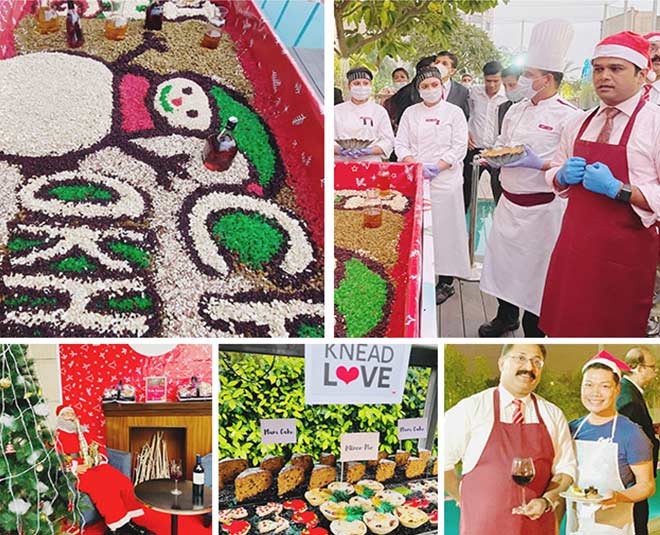 It is beginning to look a lot like Christmas at Crowne Plaza New Delhi Okhla as the hotel hosted the timeliness traditional of Cake Mixing Ceremony this Friday, 19th November, 2021.

Pradipt Sinha, Director of Food and Beverage kick started the spectacular show by narrating fables and history around the Cake Mixing ceremony. He informed that the activity marks the arrival of harvest season and onset of Christmas festivities.

“In olden times, a lot of dry fruits and nuts were harvested during the autumn season and were used in the preparation of traditional Christmas fruit cakes. They used to store the mix for the coming year with a hope of another fulfilling and abundant year. Later, this ceremony became a family affair where everyone got together and soaked the harvested fruits in wine or rum which are further dried and stored.” he shared.

Now it was time for the most awaited moment of evening – The Cake Mixing ceremony. Amidst the refreshing autumn breeze, the poolside was decked with twinkling lights and shining props, ushering the spirit of festivities. However, the star of the show was the mesmerizing assortment of dry fruits such as cashews, prunes, pistachios, almonds, figs, apricots, raisins, nuts, black current etc. in a boat shaped cauldron.

mixing of the dry fruits with spices and spirits. The live music, varieties of Christmas bakes, Sangrias and Mulled Wine added to the charm of the ceremony. Post the ceremony, the mixture was put into airtight container so that it soaks up the spirits and spices.

The same mix would be used by the Chefs to bake array of goodies such as Plum Pudding, Plum Cake Dandee cake, Mince pie, Christollen, Christmas cookies which will be available at French Heart - patisserie of the hotel. Guests will also have option to customize delectable Christmas hampers for gifting and indulgence.

has far more significant in the current times. The underlying essence of the ceremony is also a reminder of the cross-cultural impact of celebrations. The festivities come wrapped with hopes and revival for a happier tomorrow.”

The event also marked the announcement of the ‘Grills by the Pool’ experience at the hotel with the invitees being the first ones to taste the new menu. With the nip in the air, the ‘grilled-to perfection’ dishes paired with invigorating cocktails made for the perfect after-party.