C.A Bhavani Devi made us all proud with her debut performance at the Tokyo Olympics.

Yes, this is the first time ever that an Indian fencer has managed to qualify for the Olympics. Meet, CA Bhavani Devi, a 27-year-old sabre fencer got her ticket to the games earlier this year.

Let us tell you that fencing has been a part of the Olympic games since 1896. It was in the year 1974 that the sport was introduced in our country and it is 2021 today that an Indian player has made it to the Olympics.

Chadalavada Anandha Sundararaman Bhavani Devi hails from Washermanpet, a northern neighbourhood of Chennai, Tamil Nadu and it's been years that she has been practicing fencing now.

India's first-ever fencer CA Bhavani Devi at her Olympic debut had a good start. By beating Tunisia's Nadia Ben Aziz, she managed to advance to the Table of 32. However, she lost to Manon Brunet of France.

Where Did It All Start?

Bhavani Devi's journey to the Olympics has been a long one. Bhavani Devi did her schooling at Muruga Dhanushkodi Girls' Higher Secondary School, Tondiarpet. A lot of different sports were introduced in her school including swimming, boxing, fencing among others. All these sports were a part of the sports in schools programme by late CM J Jayalalithaa. Bhavani Devi didn't get an opportunity to sign for any sport other than fencing because all others were completely full. Class 6 student, Bhavani Devi had no idea what fencing was. It was a new sport to her and she got really excited to learn it. She practised for years before she joined the Sports Authority of India center in Kerala when she was in class 10.

Through her journey in the sport, Bhavani Devi has won many accolades. Some of her accolades include winning Bronze at the  Commonwealth Championship (Malaysia) in 2009, Gold at the Commonwealth Fencing Championship (Australia) in 2018, Silver at the Tournoi Satellite Fencing Competition (Belgium) in 2019 among others.

Bhavani Devi only got better at fencing. She performed well in the Junior category and her family stood by her as she worked hard on her game. When she reached the senior category, her performance graph began to drop. This was the time when she was given a lot of advice related to her life. One of the most common ones was to pick one between studying and work for a better future because everyone thought fencing has no future in India. 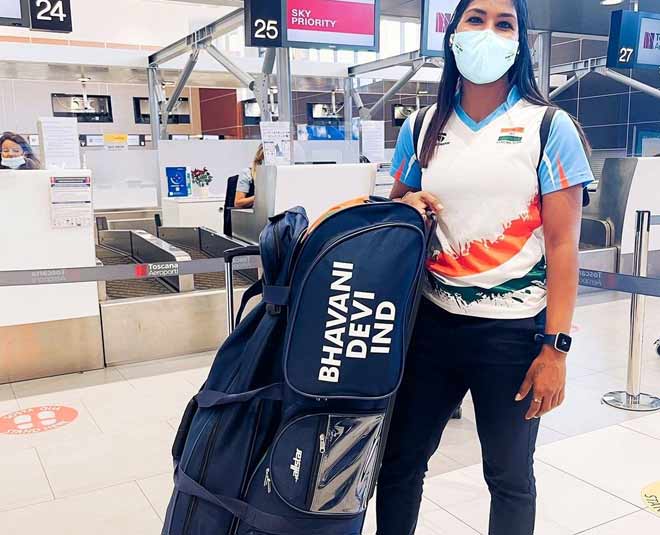 Fencing is a lesser-known sport in India but that didn't take away Bhavani's love for it. She had her family by her side and determination in her heart to get better and better.

A post shared by C A Bhavani Devi (@bhavanideviofficial)

Bhavani Devi always dreamt of playing at the Olympics and her dream will finally come true this year. For the games this year, the sabre fencer has been training with an Italian national fencing team. Bhavani Devi shifted her base to Italy some years back and has been training with the national fencers there. In an interview with a leading daily, she shared that she is really thankful for getting an opportunity to train with an Italian team and they have been very welcoming.

Don't Miss: Born To A Farmer Family, Bhawna Fought Against All Odds To Qualify For Tokyo Olympics

While talking about her preparations for the Olympics, Bhavani Devi shared that it is about staying in the best shape mentally and physically.

Bhavani Devi's journey to getting a ticket to the Tokyo Olympics is proof that with discipline and dedication, you can achieve just anything! Don't you think? Share your thoughts with us on our Facebook page. For more such inspiring stories, stay tuned!